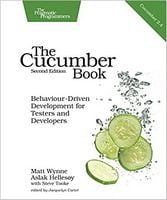 Your customers want rock-solid, bug-free software that does exactly what they expect it to do. Yet they can't always articulate their ideas clearly enough for you to turn them into code. You need Cucumber: a testing, communication, and requirements tool-all rolled into one. All the code in this book is updated for Cucumber 2.4, Rails 5, and RSpec 3.5.

Express your customers' wild ideas as a set of clear, executable specifications that everyone on the team can read. Feed those examples into Cucumber and let it guide your development. Build just the right code to keep your customers happy. You can use Cucumber to test almost any system or any platform.

Get started by using the core features of Cucumber and working with Cucumber's Gherkin DSL to describe-in plain language-the behavior your customers want from the system. Then write Ruby code that interprets those plain-language specifications and checks them against your application. Next, consolidate the knowledge you've gained with a worked example, where you'll learn more advanced Cucumber techniques, test asynchronous systems, and test systems that use a database. Recipes highlight some of the most difficult and commonly seen situations the authors have helped teams solve. With these patterns and techniques, test Ajax-heavy web applications with Capybara and Selenium, REST web services, Ruby on Rails applications, command-line applications, legacy applications, and more.

Written by the creator of Cucumber and the co-founders of Cucumber Ltd., this authoritative guide will give you and your team all the knowledge you need to start using Cucumber with confidence.

Who This Book Is For

Cucumber is designed to help build bridges between the technical and nontechnical members of a software team, and we’ve tried to consider both of those readers. The majority of the book is written to the technical reader, someone who is interested in test automation and already has some programming skill. However, several of the chapters—especially in the first part of the book where we explain how to write specifications—are written with the nontechnical reader very much in mind.

As the book develops, we’ll look at more complex testing situations, and the level of technical know-how required to read the chapters will increase. We’ve tried to make this buildup as gradual as possible so that if you’re only just beginning your journey into test automation, you should be able to follow along and learn as we go.

You Don't Need to Know Ruby, but it helps

Ruby is an open source programming language that can be installed and run on all major operating systems. The original—and still most popular—version of Cucumber is written in Ruby, and this book is about that version.

That doesn’t mean the system you’re testing has to be written in Ruby. One of Ruby’s many strengths is how good it is at talking to other languages and platforms, and we’ll show you how to use Ruby tools to test web-based systems that could be written in any language.

To follow along with the coding examples in the technical chapters, it will help if you know a little Ruby. Ruby is an easy language to learn, and the Ruby examples we’ll use are deliberately simple. To get the best out of this book, we suggest that Ruby novices accompany it with a copy of 'Programming Ruby 1.9 & 2.0' (4th edition).

Why You Should Listen To Us

We’ve both been building software for a living for almost twenty years, and using automated tests for nearly ten of those. Aslak created Cucumber in 2008, and Matt has been one of its most active users from day one.

We’ve used Cucumber to test all kinds of systems: from Ruby on Rails web applications, through Flash games, to enterprise Java web services. We’ve also trained hundreds of developers in how to use Cucumber, teaching the material in this book at events and companies around the world.

The Cucumber community is full of lively debate, and we’ve spent many hours of our spare time having our ideas challenged and honed in discussions with other users. We hope we’ve distilled as much of that knowledge and experience as possible in this book.

Matt Wynne is a long-standing member of the Cucumber core team, fascinated by the challenge of helping tech and business to understand one another. He's one of the co-founders of Cucumber Ltd., the company behind Cucumber. He lives on the west coast of Scotland on an old farm with his family, two cats, their dog, and some ducks. Matt tweets from @mattwynne and @cucumberbdd.

Aslak Hellesoy is the creator of Cucumber. During his career Aslak has worked with both small and large organizations in industries such as telecom, trading, insurance, car manufacturing, education, and government. Aslak is a co-founder of Cucumber Ltd, the company behind Cucumber. He tweets from @aslak_hellesoy and @cucumberbdd.

Steve Tooke is a programmer, trainer, and coach who is dedicated to improving his craft and helping others improve theirs. He's a co-founder of Cucumber Ltd. Steve tweets from @tooky and @cucumberbdd.