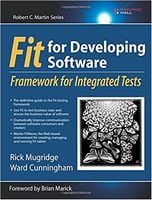 "The unique thing about Fit for Developing Software is the way it addresses the interface between customers/testers/analysts and programmers. All will find something in the book about how others wish to be effectively communicated with. A Fit book for programmers wouldn't make sense because the goal is to create a language for business-oriented team members. A Fit book just for businesspeople wouldn't make sense because the programmers have to be involved in creating that language. The result is a book that should appeal to a wide range of people whose shared goal is improving team communications."

"Even with the best approaches, there always seemed to be a gap between the software that was written and the software the user wanted. With Fit we can finally close the loop. This is an important piece in the agile development puzzle."

"Ward and Rick do a great job in eschewing the typical, overly complicated technology trap by presenting a simple, user-oriented, and very usable technology that holds fast to the agile principles needed for success in this new millennium."

"Florida Tech requires software engineering students to take a course in programmer testing, which I teach. Mugridge and Cunningham have written a useful and instructive book, which will become one of our course texts."

"Rick and Ward continue to amaze me. Testing business rules is a fundamentally hard thing that has confounded many, and yet these two have devised a mechanism that cuts to the essence of the problem. In this work they offer a simple, thorough, approachable, and automatable means of specifying and testing such rules."

"By providing a simple, effective method for creating and automating tabular examples of requirements, Fit has dramatically improved how domain experts, analysts, testers, and programmers collaborate to produce quality software."

"Agile software development relies on collaborating teams, teams of customers, analysts, designers, developers, testers, and technical writers. But, how do they work together? Fit is one answer, an answer that has been thoroughly thought through, implemented, and tested in a number of situations. Primavera has significantly stabilized its product lineusing Fit, and I'm so impressed by the results that I'm suggesting it to everyone I know. Rick and Ward, in their everlasting low-key approach, have again put the keystone in the arch of software development. Congratulations and thanks from the software development community."

"Fit is the most important new technique for understanding and communicating requirements. It's a revolutionary approach to bringing experts and programmers together. This book describes Fit comprehensively and authoritatively. If you want to produce great software, you need to read this book."

"There are both noisy and quiet aspects of the agile movement and it is often the quieter ones that have great strategic importance. This book by Ward and Rick describes one of these absolutely vital, but often quieter, practices--testing business requirements. A renewed focus on testing, from test-driven development for developers to story testing for customers, is one of the agile community's great contributions to our industry, and this book will become one of the cornerstones of that contribution. Stories are done-done (ready for release) when they have been tested by both developers (done) and customers (done-done). The concepts and practices involved in customer story testing are critical to project success and wonderfully portrayed in this book. Buy it. Read it. Keep it handy in your day-to-day work."

"I have been influenced by many books, but very few have fundamentally changed how I think and work. This is one of those books. The ideas in this book describe not just how to use a specific framework in order to test our software, but also how we should communicate about and document that software. This book is an excellent guide to a tool and approach that will fundamentally improve how you think about and build software--as it has done for me."

"Fit is a tool to help whole teams grow a common language for describing and testing the behavior of software. This books fills a critical gap--helping both product owners and programmers learn what Fit is and how to use it well."

"Over the past several years, I've been using Fit and FitNesse with development teams. They are not only free and powerful testing tools, they transform development by making the behavior of applications concrete, verifiable, and easily observable. The only thing that has been missing is a good tutorial and reference. Rick Mugridge and Ward Cunningham's Fit For Developing Software fits the bill. Essentially, two books in one, it is a very readable guide that approaches Fit from technical and nontechnical perspectives. This book is a significant milestone and it will make higher software quality achievable for many teams."

"Wow! This is the book I wish I had on my desk when I did my first story test-driven development project. It explains the philosophy behind the Fit framework and a process for using it to interact with the customers to help define the requirements of the project. It makes Fit so easy and approachable that I wrote my first FitNesse tests before I even I finished the book.

"For the price of one book, you get two, written by the acknowledged thought leaders of Fit testing. The first is written for the nonprogramming customer. It lays out how you can define the functionality of the system you are building (or modifying) using tabular data. It introduces a range of different kinds of 'test fixtures' that interpret the data and exercise the system under test. While it is aimed at a nontechnical audience, even programmers will find it useful because it also describes the process for interacting with the customers, using the Fit tests as the focal point of the interaction.

"The second 'book' is targeted to programmers. It describes how to build each kind of fixture described in the first book. It also describes many other things that need to be considered to have robust automated tests--things like testing without a database to make tests run faster. A lot of the principles will be familiar to programmers who have used any member of the xUnit family of unit testing frameworks. Rick and Ward show you how to put it into practice in a very easy-to-read narrative style that uses a fictitious case study to lead you through all the practices and decisions you are likely to encounter."

The Fit open source testing framework brings unprecedented agility to the entire development process. Fit for Developing Software shows you how to use Fit to clarify business rules, express them with concrete examples, and organize the examples into test tables that drive testing throughout the software lifecycle. Using a realistic case study, Rick Mugridge and Ward Cunningham--the creator of Fit--introduce each of Fit's underlying concepts and techniques, and explain how you can put Fit to work incrementally, with the lowest possible risk. Highlights include

About the Author
Rick Mugridge runs his own company, Rimu Research, and is an associate professor in the Department of Computer Science at the University of Auckland, New Zealand. He specializes in Agile software development, automated testing, test-driven development, and user interfaces. Rick is one of the world's leading developers of Fit fixtures and tools, and is the creator of the FitLibrary.
Ward Cunningham is widely respected for his contributions to the practices of object-oriented development, Extreme Programming, and software agility. Cofounder of Cunningham & Cunningham, Inc., he has served as Director of R&D at Wyatt Software and as principal engineer at the Tektronix Computer Research Laboratory. Ward led the creation of Fit, and is responsible for innovations ranging from the CRC design method to WikiWikiWeb.