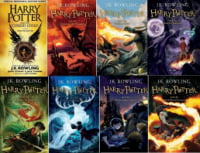 Harry Potter and the Sorcerer's Stone.

Harry Potter has no idea how famous he is. That's because he's being raised by his miserable aunt and uncle who are terrified Harry will learn that he's really a wizard, just as his parents were. But everything changes when Harry is summoned to attend an infamous school for wizards, and he begins to discover some clues about his illustrious birthright. From the surprising way he is greeted by a lovable giant, to the unique curriculum and colorful faculty at his unusual school, Harry finds himself drawn deep inside a mystical world he never knew existed and closer to his own noble destiny.

Harry Potter and the Chamber of Secrets.

Harry Potter is about to enter his second year at Hogwarts School of Witchcraft and Wizardry and little does he know that this year will be even more eventful than the last!

Action-packed with drama and excitement, this wonderful audio edition of the classic novel will utterly entrance listeners.

Harry Potter and the Prisoner of Azkaban.

Harry Potter, along with his best friends, Ron and Hermione, is about to start his third year at Hogwarts School of Witchcraft and Wizardry. Harry can't wait to get back to school after the summer holidays. (Who wouldn't if they lived with the horrible Dursleys?) But when Harry gets to Hogwarts, the atmosphere is tense. There's an escaped mass murderer on the loose, and the sinister prison guards of Azkaban have been called in to guard the school...

Harry Potter and the Goblet of Fire.

The summer holidays are dragging on and Harry Potter can't wait for the start of the school year. It is his fourth year at Hogwarts School of Witchcraft and Wizardry, and there are spells to be learnt, potions to be brewed and Divination lessons (sigh) to be attended. Harry is expecting these: however, other quite unexpected events are already on the march...

Harry Potter and the Order of the Phoenix.

Whisk your child back to Hogwarts for Harry's fifth year at wizard school, filled with run-ins with the new Defense Against the Dark Arts teacher, a disgruntled house-elf, and even tougher end-of-term exams. Add this to the rift Lord Voldemort's rise has opened in the wizarding world - between those who believe the truth about his return and those who prefer to believe it's all madness and lies - and you've got another (even longer!) adventure that's sure to cast a reading spell over your child.

Harry Potter and the Half-Blood Prince.

It is Harry Potter's sixth year at Hogwarts School of Witchcraft and Wizardry. As Voldemort's sinister forces amass and a spirit of gloom and fear sweeps the land, it becomes more and more clear to Harry that he will soon have to confront his destiny. But is he up to the challenges ahead of him?

In her darkest and most breathtaking adventure yet, J.K.Rowling skilfully begins to unravel the complex web she has woven, as we discover more of the truth about Harry, Dumbledore, Snape and, of course, He Who Must Not Be Named...

Harry Potter and the Deathly Hallows.

Harry Potter is preparing to leave the Dursleys and Privet Drive for the last time. But the future that awaits him is full of danger, not only for him, but for anyone close to him - and Harry has already los so much. Only by destroying Voldemort's remaining Horcruxes can Harry free himself and overcome the Dark Lord's forces of evil.

In this dramatic conclusion to the Harry Potter series, Harry must leave his most loyal friends behind, and in a final perilous journey find the strength and the will to face his terrifying destiny: a deadly confrontation that is his alone to fight.

Harry Potter and the Cursed Child - Parts I & II

Based on an original new story by J.K. Rowling, John Tiffany and Jack Thorne, a new play by Jack Thorne, Harry Potter and the Cursed Child is the eighth story in the Harry Potter series and the first official Harry Potter story to be presented on stage. The play will receive its world premiere in London's West End on 30th July 2016.

It was always difficult being Harry Potter and it isn't much easier now that he is an overworked employee of the Ministry of Magic, a husband, and father of three school-age children.

While Harry grapples with a past that refuses to stay where it belongs, his youngest son Albus must struggle with the weight of a family legacy he never wanted. As past and present fuse ominously, both father and son learn the uncomfortable truth: sometimes, darkness comes from unexpected places.